Good but not great.

First Man is a biographical drama about astronaut Neil Armstrong and stars Ryan Gosling in the lead role. The film covers the decade leading up to his most famous accomplishment and the numerous struggles he toiled with along the way.

My largest complaint with First Man is that there are far too many conflicts raised. The film quickly tries to cover Armstrong’s struggles with loss, family, friends, NASA, public scrutiny and the missions leading up to (and inclusive) Apollo 11. Clearly, there’s a lot going on.

The problem is that the film doesn’t know which one to focus on. In my opinion, First Man overcrams many different conflicts to the point where none of them were given enough time for them to be impactful. It reminds of the Simpsons when where Mr. Burns discovers that he has an overabundance of diseases. Each effectively cancels the others out because they all can’t fit through the “door” at the same time to cause him any harm. 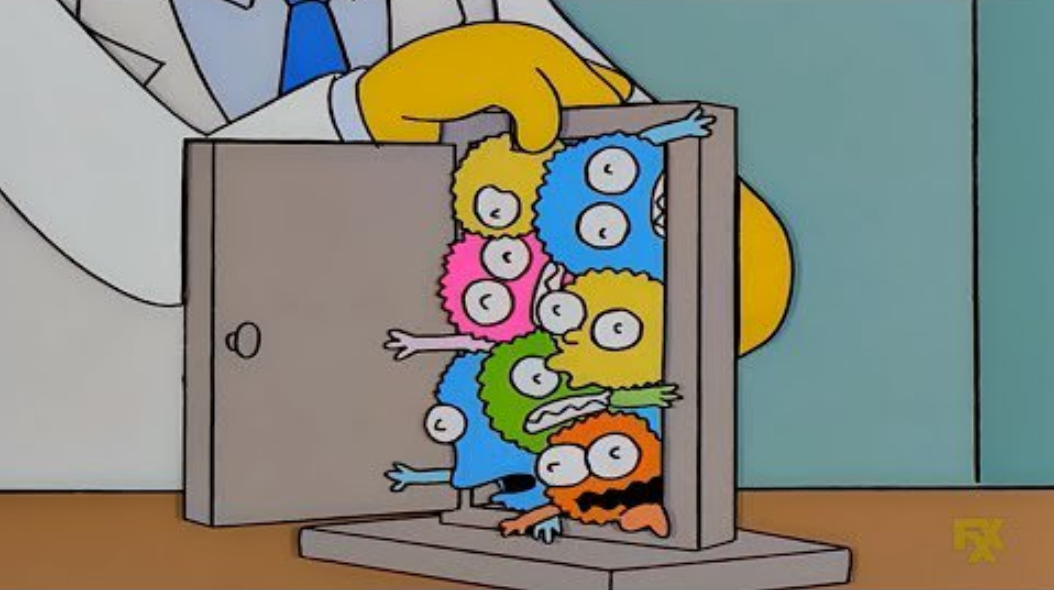 A visual metaphor for how First Man tries to cover all its conflicts.

The overall effect makes the film less dramatic than what I was expecting it to be. Comparing it to a similar film of nature like Apollo 13, First Man feels like a comfortable walk in the park. Unlike First Man, Apollo 13 focused primarily on one single event. In my view, this was a big reason why that film felt way more dramatic. One major conflict (or overarching issue) generally help an audience connect more to the struggles of characters. Instead of introducing several conflicts and hoping one of them will stick.

Maybe this is because director Damian Chazelle (La La Land, Whiplash) wasn’t responsible for writing the script. Chazelle wrote and directed Whiplash, a film that I see as one of the most intense and dramatic films of the past decade. And funnily enough that was just a fictional story about a young jazz drummer; not about mankind landing on the moon.

Surprisingly First Man was written by Josh Singer, the man responsible for Oscar-winning dramas like Spotlight and The Post. I’m even more puzzled as to what went wrong when it came to him drafting the screenplay for this film.

I also questioned some of Chazelle’s directing choices. There is a stupendous amount of the same shot setups in this film that get recycled from scenes that similar in nature. Action set pieces would often cut back and forth between extreme close-ups of the characters eyes. Scenes with characters talking would typically involve basic shot-reverse shot close-ups. While the whole film wasn’t like this and there were some other very neat shots, I couldn’t help but feel like he dropped the ball compared to his previous work.

But as I said, not all of First Man is bad. The film works well as a crash course through the history of the 1960’s space race. Most of it might not be as dramatic as it could have been but I still enjoyed getting an overview of what it took for mankind to land upon the moon. Plus one of the events shown in the film did come off as feeling very intense and reading later up on it I still can’t believe it happened in real life.

I also enjoyed the overall look of the film which felt very authentic to the period it was set in. Most of the shots included a grainy film aesthetic and made the film look like it was produced during the 60’s. The same goes for the costumes and set designs that really do put you in the atmosphere of this time.

First Man isn’t a dramatic masterpiece and I fathom to say that I’d be surprised if it was nominated for Best Picture at the Oscar’s (though many critics are raving about the film). It’s still an enjoyable film and I didn’t find myself being bored overall, even if I was ultimately disappointed. Give this one a watch if you’re interested in seeing what it took to get man on the moon, but I wouldn’t be rushing out of the house to go see it.